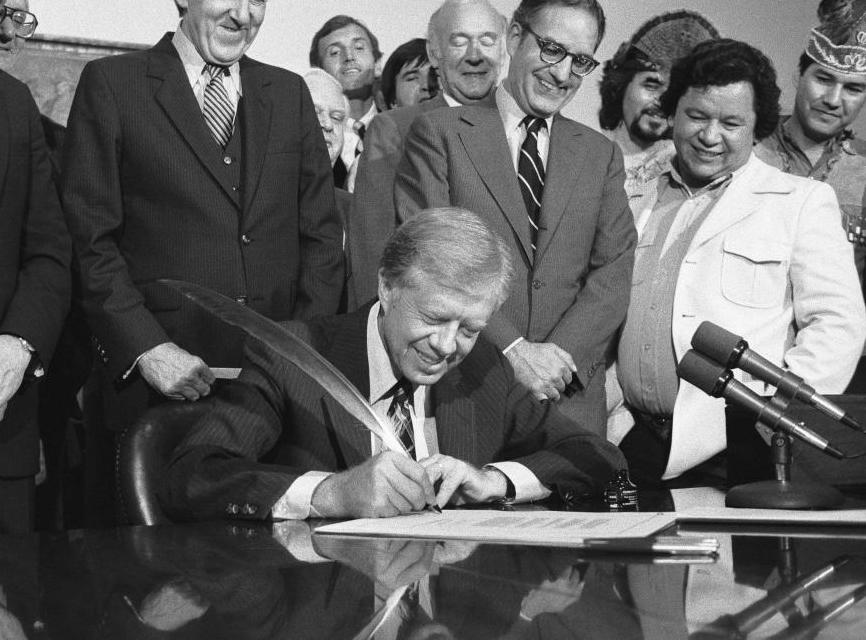 Summary of the Maine Indian Land Claims Settlement of 1980

The Indian Land Claims Settlement of 1980 was the result of legal and historical developments that began even before Maine became a state. In the governmental system created by the U.S. Constitution, as interpreted by the Supreme Court, Indian tribes were subject to the legislative power of the U.S. Congress. The individual states had no role to play in Indian affairs and no jurisdiction over tribes on tribal lands. Tribes retained their pre-existing internal sovereignty, including powers of local self-government unless expressly limited by treaty or federal legislation. The Supreme Court also affirmed that the federal government has a trust responsibility to protect tribal resources and act in the best interest of Indian tribes and their members. Pursuant to those basic principles, one of the first actions by the newly formed Congress was the enactment of the Non-Intercourse Act in 1790. That statute regulated commerce with Indian tribes and prohibited transfers of tribal land unless Congress approved them. Thus, inherent tribal sovereignty, the U.S. Constitution, and the Non-­Intercourse Act collectively defined the foundational elements of Federal Indian Law. To understand historical and contemporary Tribal-State relations in Maine, it is important to remember that the 1980 Settlement was not the source of the sovereign powers and jurisdiction of the Wabanaki Tribes. In the 1980 Settlement, Congress exercised its constitutional authority to modify and limit inherent tribal sovereign powers and jurisdiction that pre-existed Maine statehood.

Despite the basic principles of Federal Indian Law described above, during the time from the separation of Maine from Massachusetts in 1820 until the 1970s the Federal Government and the State of Maine did not treat the Wabanaki Tribes within the boundaries of Maine as sovereign Indian tribes. The Federal government failed to meet its trust responsibility to the Wabanaki Tribes by failing to protect tribal people, lands, and resources. In the meantime, the State asserted and exercised pervasive authority over the Tribes and their members. The State enacted many laws that controlled the details of Indian life, even within the historic reservations, in ways that a state could not lawfully do under Federal Indian Law. The Maine Supreme Judicial Court supported and legitimized state control of the Wabanaki with decisions such as Murch v. Tomer in 1842, holding that the Wabanaki Tribes and people were wards of the State.

As a result, when the Tribes first asserted their land claims in the early 1970’s, alleging that their lands had been acquired by the states of Massachusetts and later Maine without approval by Congress in violation of the Non-Intercourse Act, they first had to overcome the State’s dismissive contention that they were not really sovereign Indian tribes at all within the meaning of Federal Indian Law. However, in 1975 in the case of Passamaquoddy Tribe v. Morton, the federal Court of Appeals rejected the State’s constricted view of the Tribe and affirmed that the United States government had always had a trust responsibility to the Tribe. After the Morton decision and before the 1980 Settlement, the federal government belatedly extended federal recognition to the Passamaquoddy Tribe and the Penobscot Nation.

Following the line of logic from Morton, two other important court decisions were made in 1979. In State v. Dana, the Maine Supreme Judicial Court held that the State of Maine had no criminal jurisdiction over tribal members on their historic reservations. In Bottomly v. Passamaquoddy Tribe, the federal court confirmed that the Wabanaki Tribes retained the full attributes of tribal sovereignty as defined by Federal Indian Law. These cases collectively affirmed that Federal Indian Law should always have controlled Tribal-State relations in Maine.

In the initial stages of the land claims settlement negotiations, the State’s priorities were to defeat or minimize the claims for return of land and make sure that the federal government, rather than the State, absorbed the financial cost of any settlement of the claims. Meanwhile, the Tribes were focused on restoring a land base to support their people and cultures, receiving monetary compensation for lands and resources that had been illegally taken, and preserving their status as federally recognized tribes. As a result of the Dana and Bottomly court decisions affirming tribal jurisdiction on the existing reservations, the Governor of Maine and other state officials became more concerned about limitations on state jurisdiction. They insisted that any settlement of the land claims must include state jurisdiction over the tribes, even within the historic reservations. In turn, the tribal negotiators and their attorneys had some concerns about what they perceived as pervasive and harmful federal government interference in tribal self-governance elsewhere in Indian Country. The tribal negotiators and their attorneys also had some concern that new developments in the Supreme Court could undermine their legal claims. The negotiators on both sides were under a lot of political pressure to reach a settlement. These factors set the stage for the creation of the highly unusual jurisdictional provisions that became attached to the settlement of the land claims. The resulting extension of state authority over the Wabanaki Tribes, within their historic reservations as well as on lands reacquired with Settlement funds, is being re-examined in current efforts to restore tribal authority and sovereignty.

Basic Elements of the 1980 Settlement

The Maine Indian Land Claims Settlement of 1980 was signed by President Carter on October 11, 1980. It consisted of two statutes, one enacted by Congress and the other enacted by the Maine Legislature. Both statutory parts of the Settlement required approval by Congress, in accordance with the controlling authority of Congress under Federal Indian Law:

It is important to note that the “internal tribal matters” language in the Maine Implementing Act was narrow in comparison to the prevailing federal concepts of internal tribal affairs and self-determination that had evolved by 1980. During the 1970’s the federal government had pursued a policy of actively supporting self-determination by Indian tribes and limiting state authority. Congress had enacted numerous laws to bolster tribal self-governance. By contrast, the jurisdictional provisions of the 1980 Settlement ran contrary to those developments elsewhere in the country and moved Wabanaki-Maine relations in a fundamentally different direction, limiting tribal self-determination and granting extensive jurisdiction to the State of Maine.

The Maine Implementing Act addresses numerous other issues, including but not limited to identification of lands that could potentially be re-acquired by the Tribes and placed in federal trust, limitation of tribal sovereign immunity, regulation of fish and wildlife, taxation, and creation of the Maine Indian Tribal-State Commission.

Post-Settlement Jurisdictional Issues – Soon after the 1980 Settlement was finalized, fundamental disagreements emerged between the Tribes, the State, and other parties concerning the meaning of “internal tribal matters” and municipal status, resulting in numerous disputes and frequent litigation. In most instances the state and federal courts have rejected Tribal interpretations of Settlement language while adopting the positions of the State and other non-tribal parties.

Judicial Canons of Construction in Federal Indian Law – The U.S. Supreme Court has fashioned special rules of construction, including the rule that ambiguities in statutes enacted for the benefit of Indians are resolved in favor of the Indians. However, in most instances the state and federal courts have not found the Indian Law Canons to be applicable or determinative when deciding legal disputes between the State and the Wabanaki Tribes about the meaning of Settlement language.

Built-In Flexibility – The 1980 settlement was intended to create flexible jurisdictional relationships that could be modified to respond to changing circumstances. To that end, MICSA included an unusual provision wherein Congress anticipated and consented in advance to future agreements between the State and Tribes to modify the unusual jurisdictional structure created by the Maine Implementing Act. Over the years since 1980 many changes have been proposed. However, with a few exceptions, the State has not agreed to significant changes to the jurisdictional provisions of the Maine Implementing Act.

The Houlton Band did not directly participate in the negotiations between Maine and the Penobscot and Passamaquoddy tribes but was eventually included in both the MIA and MICSA, receiving federal recognition and a small portion of the financial settlement. The MIA did not include the Houlton Band in the "internal tribal matters" and municipality provisions applicable to the Penobscot and Passamaquoddy, but instead provided that the Houlton Band would not exercise or enjoy the powers, privileges and immunities of a municipality nor exercise civil or criminal jurisdiction within their lands unless additional legislation authorized the exercise of such governmental powers. The federal statute, MICSA, stated that Maine and the Houlton Band could make agreements regarding jurisdiction on tribal trust lands.

In 2007 the First Circuit Court of Appeals ruled against the Aroostook Band in the important case of Aroostook Band of Micmacs v. Ryan. The critical issue in the case was whether the Maine Indian Claims Settlement Act of 1980 (MICSA) applies to the Aroostook Band. As noted above, MICSA states that all tribes and tribal members in Maine, except for the Passamaquoddy Tribe and Penobscot Nation, are subject to the laws and jurisdiction of the State to the same extent as any other person. In the Ryan case the Aroostook Band contended that MICSA does not apply because Congress subsequently enacted the separate settlement act regarding the Aroostook Band. The Federal Court of Appeals rejected the Band's argument, holding that state laws remain applicable to the Aroostook Band despite the enactment of the subsequent and separate Micmac settlement act. The U.S. Supreme Court denied review of the case.
At the present time substantial disparities continue to exist regarding the jurisdiction and powers of the four federally recognized Wabanaki Tribes. The possibility of establishing jurisdictional parity between the Wabanaki Tribes has been one of the issues addressed in recent proposals to amend the jurisdictional structure that was created by the 1980 Settlement.